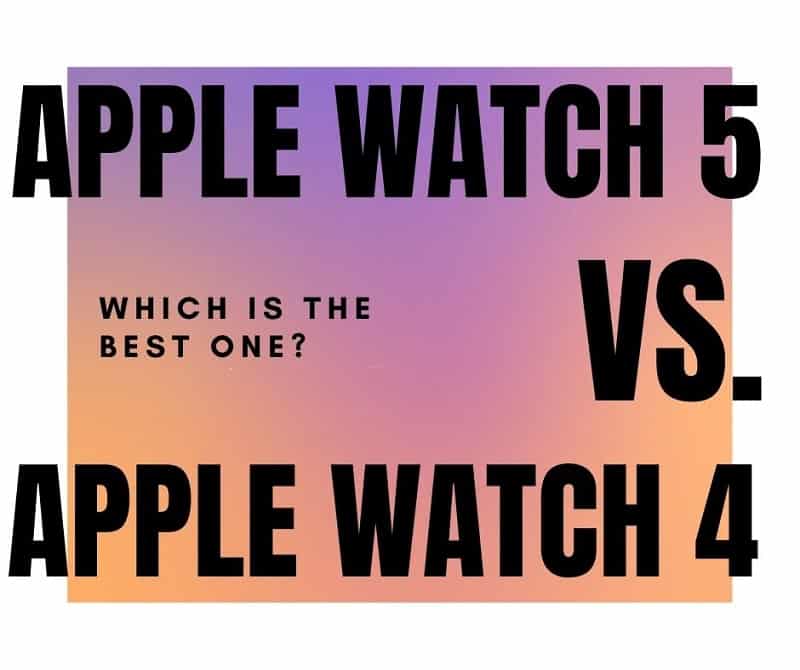 Apple is a huge tech corporation that took over the world by storm. Today Apple is not just a part of the western countries but has found its way worldwide. It wouldn’t be wrong to say that Apple is sort of a status symbol, however, over the years it has become more than a luxury for many. Such has been the impact of Apple, whether it’s a smartphone or a watch.

Apple Watch 4 was launched in 2018 while Apple Watch 5 rolled out in 2019. Even though both look similar, there are some advanced features and upgrades added to the latter, which makes it beat the Apple Watch 4. However, both continue Apple’s trend of smartwatch market domination.

These products have experienced huge sales despite the fact that they are only compatible with iPhones. Specifically, you need to have an Apple iPhone 6S or newer to be able to connect with the smart watches via Bluetooth.

Whether it is the Apple Watch 4 or 5, you will have access to excellent fitness and health tracking features. These watches are designed to automatically monitor exercises and show workout plans for everything, from yoga to hiking. Both Apple watch models pack activity reminders if you have been inactive for too long. All the data will be published on the health app on your phone.

When it comes to smartwatches, it is an essential feature that matters. Apart from being an active fitness and lifestyle tracker, a smartwatch also serves as an extension to your phone, letting you text and answer calls and even browse your favorite social media platforms.

When you plan to invest in a smartwatch, especially something like an Apple Watch, you should carefully consider your budget first. The iPhone that you own cost you a lot of money. Consider its features such as design, display, GPS, exercise mode recognition, heart rate monitor, sleep tracking, and swim tracking among others. Battery life is also another important feature to look into when buying an Apple Watch.

Apple Watch Series 4 is a full redesign of the hardware with a new body and a new size. Not only are there changes in the hardware, the watch includes a bigger screen size that almost touches the edges, a slightly thinner body, and a brand new heart sensor.

You get two versions of the watch with 40mm and 44mm. The noticeable design difference of Apple Watch 4 from previous watches is the bigger screen that nearly reaches the edges. Series 4 is also a bit thinner which means that the overall volume of the watch has decreased. At 48 g, it isn’t too heavy on the wrist and can be comfortably worn the whole day.
Beyond the size and the screen, there are a few other subtle exterior differences that have been made on the hardware. The backplate of the watch is made from ceramic – instead of metal – being a better receiver for wireless signals.

The screen on the Series 4 is 30% bigger than its previous watches. It has an OLED display that nicely blends colors on the watch face glass. The full-screen watch face goes closer to the edges of the watch and includes rounded corners.

The watch is powered by an Apple S4 system chipset which hosts a dual-core processor, Apple claims this makes the watch twice as fast compared to previous generations. This new chipset powers the watch giving it the ability to detect falls and measure ECG among other things.

Coming to fitness, the watch houses an automatic workout detection feature. This can tell if you have started or stopped a workout. You can also store your workout time on the watch. There are options for yoga, hiking, setting a target pace, and tracking your pace until the goal is achieved. The watch will also tell your cadence as you run.

Fitted with WatchOS 5, the device is able to detect low heart rate as well as a high heart rate. Apple added detection for irregular rhythms and alerts as well. Another fitness-centric feature on the Series 4 is that it can take an electrocardiogram (ECG). Employing electrodes built into the back of the watch and the digital crown located on the side it can capture an ECG and send a PDF of your results to your doctor.

A unique feature of this watch is a “hard fall” detection made possible by the new 800Hz accelerometer and gyroscope that can measure up to 32 G-forces. The watch will recognize if you have had a fall and ask if you would like to call emergency services. In case you don’t move for a full minute after falling, the watch will automatically call emergency services and send a message to your emergency contact. This is especially helpful if you are a person with a heart condition or other illnesses.

One feature that is often missed out while talking about Apple Watch 4 is its ability to remotely trigger the camera on your iPhone using the Camera app on the watch. This feature lets you shoot remotely by clicking on the trigger command from the watch display.

The battery life can last for a day and a half after a single charge. It will last for a day with the heart monitor and GPS running in the background. Apple has also added the ability to vary its frame rate of the screen to save power.

Apple updated the Apple Watch 4 to the Series 5, fitted with a handful of new features while it retained the same design. However, there are only a few notable changes to differentiate the Apple Watch 5 from 4.

The Apple Watch 5 took the center stage with its “always-on” display which eliminates the hassle of activating the screen to light up every time you need to consult it. Coupled with WatchOS 6, this watch’s features demonstrate excellent performance and simple quick-to-learn user experience.

As previously mentioned there are no visual changes to the Apple Watch 5. It comes in either a 44mm case size or a slightly smaller 40mm for those with slimmer wrists and weighs only 36 grams.

The display is where Apple has made a big change for Series 5, the “always-on” display, which means the screen always shows the time and does not blackout. Even though the watch responds quickly while you prompt it to wake it up, this feature is advantageous because you can always view the time on the spot like any other watch.

The watch is also equipped with a slick new screen technology that saves battery. Apple claims that it can change the screen’s refresh rate from as fast as 60Hz to as slow as 1Hz, updating just once per second. The screen draws less power when it is in ambient mode saving the battery life.

Just like any other elite smartwatch in the current market, the Apple Watch 5 can track steps, calories, hourly movement, relaxation, VO2 Max data, hours spent standing, as well as workouts including swimming and biking, yoga, fishing, and elliptical training.

Notification viewing is easy with a tap on the screen you can see all the alerts from your favorite apps. Messaging apps including Signal and WhatsApp can be marked as read or replied to directly from the watch. You can dictate what you want to Siri, draw out letters on the screen one at a time, or send canned responses or emojis.

Unfortunately, the Series 5 Apple Watch did not add sleep tracking. If you have sleeping disorders like insomnia and sleep apnea, sleep tracking can be extremely helpful. However, you can use apps that will monitor sleep using the Apple Watch.

It is possible to get almost two days of battery on the Apple Watch 5 out of a single charge. Charging the watch takes about an hour, and if you choose to charge it anywhere during the day it can easily last the second day of use.

Expect the battery life to decrease quickly if you use the call features on a cellular Apple Watch. The battery will also drain faster if you use it for an extended period for fitness tracking with GPS and heart rate monitoring. Even then, battery life can last a full day.

Even though there are only minor changes between Apple Watch 5 and 4, the former wins the war because of its few added features. Apple 5 has new material for its casing. You can either get it in the standard aluminum and steel or spend more for titanium or ceramic. Also, the storage capacity is doubled in Apple Watch Series 5 to 32GB, while the Series 4 has 16GB.

Apart from the above-mentioned factors and slight weight differences, the watches are practically the same. Also, the Apple Watch 5 costs more than 4. We recommend that you shell out extra money to buy the Watch 5 only if you find the added features useful or you can afford to buy the watch 5.

Apple has now discontinued the Apple Watch 4, but you will be able to find several retailers selling them online. Some people might even sell their used Watch 4 because they have the new Apple watch 5. Sabine you the expense of buying a brand new smartwatch.

There are a few important things to consider while buying smartwatches. Make sure there is an easy to use touchscreen display, GPS tracker, heart rate monitor, and automatic workout detection. Make it a point to check out the response features for notifications on the smartwatch, so you can judge the user interface and evaluate how user-friendly the watch is.

If you are a sportsperson you would definitely need the fitness tracking features of the watch. This makes your daily workout routine easier as the watch can give detailed stats of your workout. The watch also helps you if you are a lazy person as it will prod you to move when you are inactive for too long. This will help you to judge your lifestyle better and make the necessary changes.

There are many competitors in the smartwatch market, including Fossil, Samsung, and Garmin. If you have an iPhone and want to buy a smartwatch, but can’t afford an Apple Watch, you can consider other options Fossil Gen series. These watches are less expensive and have most of the features that Apple Watches boast. They also feature excellent design and have also established a fan base.