The Garmin Forerunner 35 was released a year after the Forerunner 25 was announced, promising to bring all the latest and greatest of Garmin’s tech right on your wrist.

Well, it’s all about comparing the two models, and based on your needs, you can pick the right one for you.

To spare you the effort of comparing them, we’ve put them head-to-head in our full-blown Garmin Forerunner 25 vs. 35 comparison.

Neither the Forerunner 25 nor the 35 have a touch screen. Instead, they utilize a button-based user interface, and there are 4 buttons: down scroll arrow, activity, back, and backlight buttons.

Pressing on any of the buttons will produce a beep, which can be pretty handy when you’re working out, but you can always turn it off if you want to.

Both the Garmin Forerunner 25 and 35 are water-resistant down to a maximum depth of 50 meters. They also have roughly the same weight, with the Forerunner 35 weighing 37.3g and the Forerunner 25’s large model standing at 39g. The smaller Forerunner 25 model is the most lightweight of the trio, with a gross weight of 31g.

While running, taking a quick glance at the Garmin Forerunner 35’s display is more than enough for you to keep track of your pace, while the Forerunner 25’s display would require you to squint your eyes or make a stop to be able to read the data. Also, the older model’s display can be a bit challenging to read under sunlight, especially the one in the small model.

On the other hand, the Garmin Forerunner 35 falls behind in watch mode compared to the Forerunner 25, lasting just 9 days. That was expected considering that the Forerunner 35 has more sensors than its predecessor, but 9 days isn’t that bad anyway. Of course, you can improve battery life by turning off GPS or any other always-on sensors.

Activity tracking is where the Garmin Forerunner 25 falls behind quite a bit. It can only track running activity, providing very little details about your jogs. However, for someone who has just started running, it should be enough.

On the other side of the coin, the Garmin Forerunner 35 can track many more activities, including running, walking, cycling, and interval training, making it a more favorable choice for cross-fitters, bodybuilders, and cyclists. You also get sports profiles that provide you with vital metrics about your performance and progress.

The Forerunner 35 ditches that for a wrist-based optical heart-rate monitor that doesn’t require a chest strap. Unfortunately, it’s a bit slow, but it’s still better than the other option, right?

You can connect both Forerunner watches to many of Garmin’s sensors, including the Garmin Heart Rate Monitor, Garmin Soft Strap Premium HRM, and Garmin Footpad.

Last but not least, both Forerunner 25 and 35 have a Move Bar that motivates you to get up and start working out if you sit for a prolonged period.

Garmin Forerunner 25’s user interface is pretty basic, but the good news is that it’s super easy to use. You’ll be able to figure out how to do everything within a day or two of using the watch.

On the contrary, the Forerunner 35’s interface is a bit more polished and boasts a modern look and feel. It may take a while for you to explore the watch’s features, but once you get the hang of it, using the watch on a daily basis will be a breeze.

Not to mention, the Forerunner 35 is capable of displaying 3 metrics at the same time, compared to the Forerunner 25’s ability to display only 2 at a time.

Since the Garmin Forerunner 35 is the Forerunner 25’s successor, it comes at a higher price tag. The price difference isn’t huge, but it’s up to you to decide whether the additional features are worth the extra cash.

However, if you’re on a budget, the Forerunner 25 is the clear winner here.

The Garmin Forerunner 25 is available in 4 color options, which are:

However, keep in mind that the first two are exclusive to the smaller models because they’re targeted at women, while the other two are available in the larger model only.

On the other hand, the Garmin Forerunner 35 is available in only two color options: all-black or black and cyan.

Both the Garmin Forerunner 25 and 35 support notifications like text, email, and other alerts. You can also use Bluetooth Smart to connect your watch to Garmin’s Connect smartphone app. The app also lets you track your location live and sync automatically.

Since the Garmin Forerunner 35 is an upgrade over the Forerunner 25, it’s a no-brainer that it has some new tech built inside it. One of the most notable upgrades is the built-in vibration alert, which is quite intuitive to use.

You can set your smartwatch to vibrate when you receive a message, call, or any other notification. Not to mention, you can use it to set sports milestones.

The Garmin Forerunner 35 also introduces music controls, a cool feature that allows you to control the music on your smartphone without having to take it out of your pocket. You can pause, skip, and replay songs easily while exercising with the click of a button. Unfortunately, this feature is absent in the older model.

It makes sense because it’s the newer model, and thus, it has more features and refinements. Things like the music controls, optical heart-rate monitor, better activity tracking, sports profiles, and larger display can all persuade you into getting it.

So, which one should you get? It’s up to you to decide! But the short answer is to go for the Forerunner 35 for more advanced features and the Forerunner 25 for a better price and more size options. 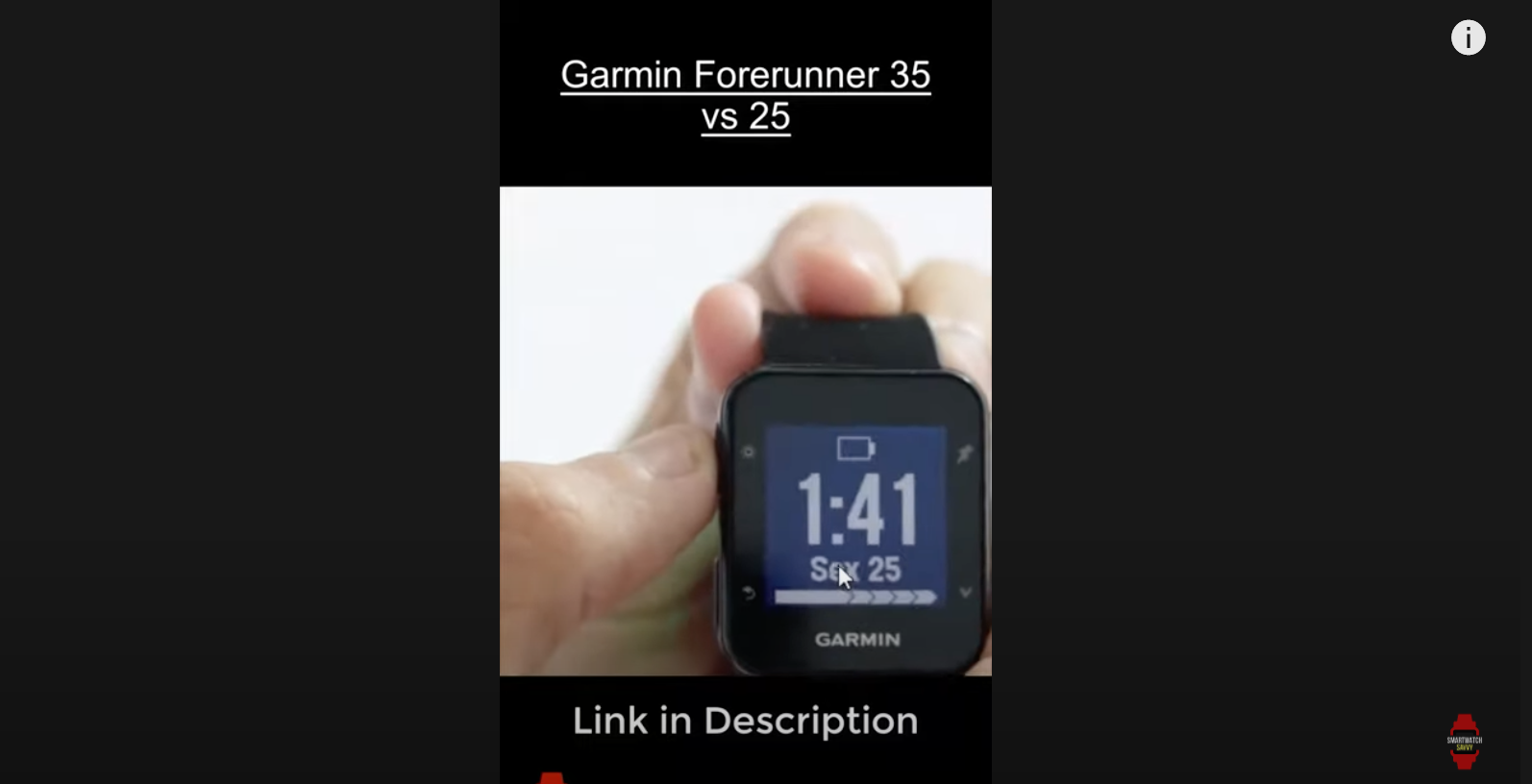