Samsung Gear S3 Classic vs Frontier Smartwatch­ – Which One is Best? 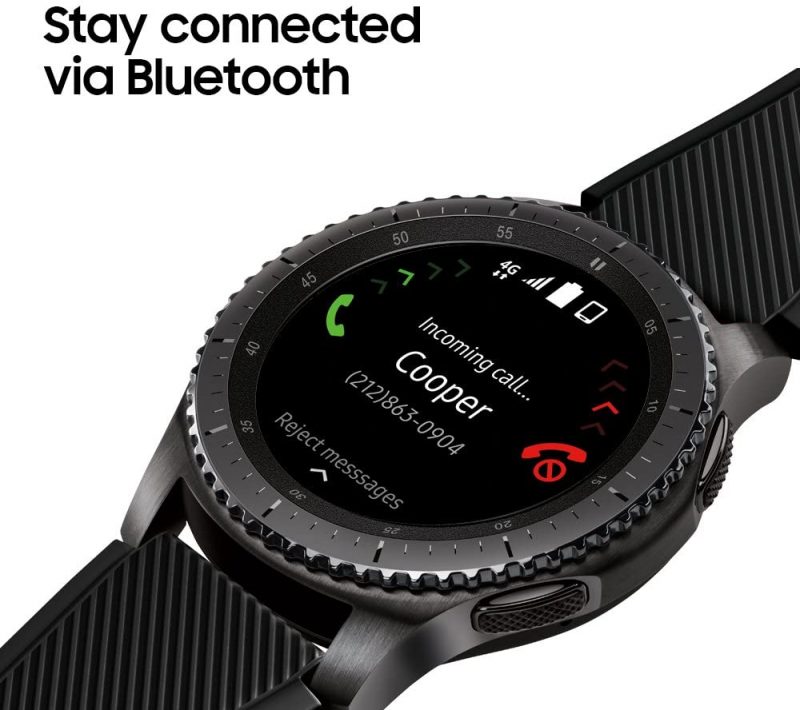 But that’s why we have put together this detailed guide.

By the time you’re done with the inside information below, you’ll know everything there is to know about the Samsung Gear S3 Classic versus the Frontier – and then some!

We highlight functionality, design, special features, and even the (small) drawbacks of these two smartwatches in a head-to-head comparison.

How does the Samsung Gear S3 Classic vs Frontier comparison shake out?

Read on to find out!

There are a couple of different things we are going to focus on in this detailed breakdown, including:

… And that’s just the tip of the iceberg!

We take a holistic look at both of these two smartwatch devices to help you really understand which of them is worth your hard-earned money.

Let’s get into it.

The Samsung Gear S3 Classic is one of the best-looking smartwatch devices you’ll find on the planet today.

Clean lines, classic (almost vintage) styling, and a lot of refinement help this watch pass as a traditional watch – at least until you get up close and start pressing a bunch of buttons!

The face of the watch is bright and easily seen in all lighting conditions, and the default design on this smartwatch is an analog kind of look that again comes off as very high-end and very elegant.

One of the coolest features of the Samsung Gear S3 Classic is that it has one of the best battery capacities in the business.

Running “under the hood” of this smartphone watch is the latest iteration of the Samsung Android smartwatch operating system called Tizen.

Tizen is the next generation operating system for wearable Android technology, abandoning the older (and admittedly clunky) Android Wear OS that a lot of people were crazy about.

The operating system is very clean, very minimalist, and has a sort of “get out of the way” approach compared to other wearable operating systems. It allows Android to shine, allows for the integration between your phone and your watch to take center stage, all while providing traditional watch functionality when not paired, too.

Rotating bezels handle the bulk of the heavy lifting when it comes to controlling how you interact with the Classic.

Two buttons are also positioned alongside the bezel that you can use, contextual buttons that will change functionality depending on what’s displayed on the screen. Combine that with a highly responsive touchscreen that is super intuitive to use and it’s not hard to fall in love with the Classic straight out of the box.

Wearability is remarkable, especially for a watch that (as we mentioned earlier) is a little bit on the heavier side of things. You get used to the extra weight almost immediately, and it also lends the Classic a bit of heft that makes it feel premium

The Samsung Gear S3 Classic vs Frontier comparison is a little bit challenging to do, but only because these two smartwatch devices share so much in common with one another!

In fact, almost all of the main specifications of the hardware components, and special features of these watches are identical across the board!

The footprint, the weight, the processing power, and the operating system for both of these Samsung smartwatches are shared. They even sort of look alike!

Where things get different, though, is that while the Classic is obviously designed for more day-to-day use in the modern world – at school, at the office, etc. – the Frontier is built for those that like to play outdoors.

Strong, durable, and looking like it is ready for any adventure you can imagine (and performing like that, too), there’s a lot to like when it comes to the Frontier if you’re looking for a smartwatch that can get beat up a little bit and not show any signs of wear or tear.

The first thing you’ll notice when you compare the Samsung Gear S3 Classic vs Frontier models is that the Frontier has a rubberized material that wraps almost all over the entirety of the watch itself (aside from the touchscreen, of course).

This rubberized material is completely missing on the Classic and it’s an easy way to identify one model over the other.

The rubberized material provides extra layers of shock-resistant and waterproofing capabilities to the Frontier, giving you more confidence to wear the smartwatch in less than ideal conditions.

The rubberized/silicone band included with the Frontier is also quite a bit different than the genuine cowhide leather band that you find on the Classic – again showing you with a different kind of “personalities” that both of these smartwatches have.

It’s clear the engineers at Samsung really thought everything out.

The interface of this smartwatch is identical to the Classic in a lot of ways, though instead of the traditional analog watch face that you’ll find default on the Classic you’ll find a digital one on the Frontier.

The rotating bezel, two contextual buttons, and 1.3-inch touchscreen features that you’ll find on the Classic are still going to be the main interface options on the Frontier as well.

Really, stacking these two up against one another shows just how similar they are.

There are some differences – really in how you probably would choose to wear these watches – but they have a lot more in common than they have differences.

As far as the winner of these two watches goes, it really all boils down to what you’re looking to do and what you are hoping to get out of your new smartwatch purchase.

The Classic, for example, is definitely a more refined smartwatch and something that you would likely wear to the office, to the board room, or to school, or on a date.

The Frontier, on the other hand, is the smartwatch that you would want to have on your wrist while you were out climbing, camping, hiking, or working out.

Either of these two watches could certainly be worn in the reverse situations (the Classic outdoors and the Frontier at the office), but both have been finely tuned to excel in specific situations.

If you’re going to be spending more time “in the jungle”, the Frontier is where you’ll want to spend your money. It’s just built for a more active lifestyle and more time adventuring outdoors.

If, on the other hand, the only jungle you’re going to be spending time in is the concrete jungle – the suburbs or the city – then the odds are pretty good that you’re going to want to have the more refined Classic from Samsung strapped to your wrist.

At the end of the day, you really can’t go wrong with either of these two Samsung Gear S3 smartwatches.

As we highlighted a number of times throughout the detailed comparison above, both of these watches share a lot more in common with one another than they have differences.

The smartwatch platform that they have been built on top of his almost identical across the board.

As you can see, it’s really tough to make the wrong decision moving forward with either of these two smartwatch options.

At the same time, both of them have definitely been purposely built for specific situations and specific people in mind.

The person that spends a lot more time indoors than out and the person that wants a more elegant, luxury looking kind of smartwatch will (naturally) be drawn more towards the Samsung Gear Classic.

The person that spends as much time as possible outdoors and needs something rugged and functional will trend towards the Samsung Gear Frontier.

All in all, though, the odds are pretty good that you won’t walk away from either of these two smartwatches disappointed in what Samsung brought to the table.

Both of them are fast, snappy, easy to use and control, and have built-in synchronization solutions that make them the perfect partner for your Android device (especially if it’s made by Samsung, too).

Sure, there are a couple of little issues that each of these has (particularly when it comes to synchronizing with non-Samsung devices) – but nothing could be described as a deal breaker or a game changer.

You still get the legendary reputation for innovation, durability, and reliability that Samsung has become known for worldwide. You get to take advantage of next-generation hardware and software designed for the modern world. And you get one of the most stylish smartwatches attached to your wrist when you go with either of these two options, too!